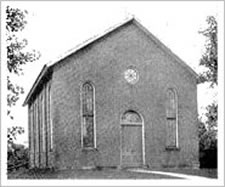 1843-1853
Mass was said in the Ashland area by Frs. Brennan, O'Neill, Maloney and Gallagher from Wooster in private homes in the Ashland area.
1853
St. Edward Catholic Church is organized.
1864
Bishop Rappe purchases "Old Hopewell" Presbyterian Church which had not been in use the previous 18 years. The congregation is made up of some 30 families, mostly Irish, who had come to Ashland with the building of the Erie Railroad. St. Edward was served by priests from Mansfield St. Peter until 1872.
1869
The church burns to the ground.
1870
A new brick church is constructed on Cottage Street. With the establishment of a parish in Loudonville, St. Edward becames a mission of Loudonville St. Peter. After the completion of the Erie Railroad, the Catholic population of Ashland dwindled.
1881
Only six Catholic families remain. The church is closed.
1899
The church reopens as a mission from Shelby St. Mary.

Re-awakenings: First Half of the 20th Century 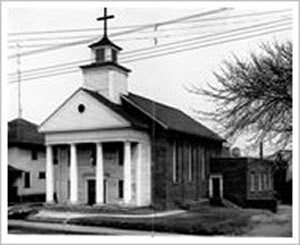 1901
St. Edward is again transferred to Loudonville St. Peter as a mission.
1922
Fr. G.I. Gilhooly is appointed the first resident pastor of St. Edward. A rectory is built during his pastorate.
1925
Fr. Leo Warth succeeds Fr. Gilhooly in August. During his pastorate, the debt on the new rectory is paid, new Stations of the Cross are erected, new windows installed, and new vestments purchased for the church.
1931
Fr. Joseph Mahan becomes the third resident pastor. During his pastorate the basement of the church is dug and a parish hall is constructed.
1937
Fr. William E. Rooney succeeds Fr. Mahan. During his pastorate the sanctuary is modernized and repairs are made to the rectory.
1941
Fr. Leonard V. Wheatley becomes pastor and serves through the difficult World War II years. Despite the scarcity of materials, he is able to redecorate the interior of the church and undertakes much needed repairs in the rectory.
1945
Fr. Vincent Jones succeeds Fr. Wheatley. The steady growth of the parish necessitates an extensive building program. Prior to the remodeling and enlargement of the church in 1945, the seating capacity was 145 and the lack of a suitable parish hall is a severe handicap to the social side of parish life.

Expansion Years, Church and School: Second Half of the 20th Century

1949
Ground is broken in early September for an addition to the church. The new addition doubles the seating capacity of the church and provides for new sacristies, baptistery, choir room, and an enlarged sanctuary. The basement level provides the hall with a kitchen for parish suppers and social affairs.
1952
Ground is broken for St. Edward Elementary School.
1956
Fr. George A Schneider succeeds Fr. Jones.
1962
Fr. Walter A. Lechtenberg is appointed pastor.
1965
Fr. Edward J. Rumplink is appointed pastor.
1966
Fr. Jerome O. Turins becomes pastor and serves until 1978. His goal is to pay off the church's debt before he leaves, which he accomplished. Fr. Turins was often seen walking in Ashland to call on the sick at Samaritan Hospital.
1978
Fr. Philip Pritt becomes pastor from and serves until 1980.

1980
Fr. James M. Cassidy is assigned to St. Edward. Major repairs are completed on the church. Through the generosity of church members, the Donley Seed building is acquired as a new parish hall, with parishioners donating time and skills to renovate the building into a social hall and sports facility.
1996
A building committee begins to explore the possibility of expanding the school and church.
1997
The new school addition is opened.
2000
The new church is officially dedicated. The old church is taken down and a prayer garden is erected as a memorial to all those who contributed to the building of St. Edward over the years.
2010
Fr. Rodney A. Kreidler is appointed as St. Edward's 13th resident pastor. One month into his pastorate, a structural issue was discovered with the parish hall and it was closed. A building campaign was begun to erect a new Activity Center for the parish.
2014
The new Parish Activity Center is opened in February.
2022
In August, a new bell tower was erected.  The bell that was installed in the 1949 addition to the prior church was re-installed. While the origins of the 1924 bell are unknown, we honor the tradition of naming the bell in the new tower St. Mary, Our Lady of Lourdes in recognition of Fr. Cassidy.